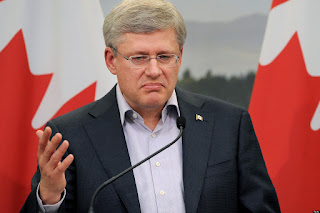 While answering reporters’ questions on the campaign trail on a day when North American stock markets plummeted, Prime Minister Harper explained that his Conservative government was best positioned to deal with the problem.
Barely reliable sources revealed that Mr. Harper followed up his statement with some off-the-record comments.
“Who better than us to deal with a fragile economy and volatile stock markets,” said Harper. “After all, this is our second recession and we have, by far, more experience than any other party in guiding Canada into and through recessionary times.”
The prime minister also touted his party’s ability to deal with political scandals.
“Who do you want handling screw-ups like the Duffy Affair,” asked Harper. “Mr. Trudeau or Mr. Mulcair who have no experience with such matters or a government that has weathered everything from robocalls to F-35 fighter jet cost overruns to the Canadian Food Inspection Agency scandal?”
“And when it comes to Senate scandals,” said Mr. Harper. “The Duffy Affair is just one of many blunders on our watch. Don’t forget; we’ve also handled the Pamela Wallin fiasco as well as the Patrick Brazeau mess. Neither Mr. Mulcair nor Mr. Trudeau can claim that.”
“And when it comes to the federal budget,” the prime minister continued. “Who better to lead Canada into the red than the Conservative Party? When we first took office, we managed to convert a $13.8 billion surplus into a $5.8 billion deficit in only two years and we’ve continued to create deficits on a consistent and ongoing basis ever since.”

As for the energy sector, Mr. Harper again urged Canadian voters to stay the course and stick with a party with a proven track record.
“Since we took power,” said Harper. “We are more committed to oil than ever and neither the NDP nor the Liberals can say that. Unlike those other parties, we’ll never let silly things like climate change get in the way of producing as much oil in as many places as we can.”
According to Mr. Harper, his party is best placed to deal with just about anything that comes up. “Whether it’s building fake lakes for G8 summits, eliminating the long-form census, muzzling government scientists or packing the Supreme Court with unvetted ideologues,” said Harper. “We’ve got the other parties beat hands down.”

Posted by David Martin at 2:35 PM No comments: 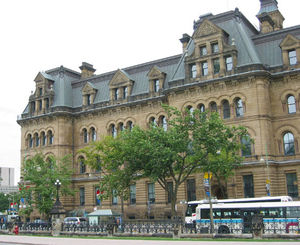 Considering all the revelations coming from the Mike Duffy trial, it’s perhaps not surprising that the following discarded draft job posting was recently recovered from a trash bin on or near Parliament Hill:

PRIME MINISTER’S OFFICE
Employment Opportunity
Chief of Staff position
The incumbent will work as the head of a PMO team dedicated to serving the needs of the current prime minister. He will be in charge of the day-to-day operations of the Office of the Prime Minister and, in particular, will be responsible for the limitation and ultimate eradication of any potential problems including but not limited to spending scandals, voting scandals and Senate scandals. The incumbent will report directly to the prime minister except in those cases where it may be preferable that the prime minister not be made aware of what the heck is going on.
Qualifications
The successful candidate will ideally possess a legal background. Knowledge of the Canadian legal system and court structure will be very helpful, particularly knowledge of any relevant circumventions, workarounds or bypasses.
Possession of a five-figure chequing account, while not essential, would be a valuable asset in the event that the incumbent is required to personally cover any unforeseen politically uncomfortable third-party expense claims.
The applicant should possess basic computer skills including the ability to send, receive and, in some instances, read internal e-mails.
Relevant experience
Previous experience in the fields of small fire extinguishment, minor scandal cover-up and own-sword-falling-on will be most helpful.
Desirable skills include deniability, obfuscation, lip tightening and buck passing.
Language requirement
Although the position is nominally rated as bilingual, English is essential and French language ability, while useful, is not mandatory. However, the applicant must be fully fluent in bureaucratese, truthiness and Newspeak.
Job classification and salary
This is a term position ending on Monday, October 19th with an outside chance of at least a short renewal. At this point, you can pretty much name your own salary.
References
It would be nice if you have some but, at this late stage, it’s not really that big a deal.
Preference
Preference will be given to members in good standing of the Conservative Party of Canada or any right wing think tank.
Legal requirement
The PMO is an equal opportunity employer ostensibly dedicated to inclusion and diversity although our usual preference is to hire white, male lawyers. The PMO has no bias against women (except perhaps Pamela Wallin) or aboriginal Canadians (except perhaps Patrick Brazeau) or non-lawyers (except perhaps Mike Duffy); it’s just that we’re a primarily white male organization and would like to keep it that way.
Application deadline
Yesterday if not sooner.
Posted by David Martin at 9:28 PM No comments:

How to Run for Prime Minister

Have you always wanted to run for prime minister but were afraid to try? Would you like to be addressed as The Right Honourable but don’t know where to start?  Have you ever wondered what it would be like to have the most powerful non-banking position in the country?
Well wonder no more because now there’s K-tel’s new audio course “How to run for prime minister.” It’s a four-CD program that will help guide even the rawest of political rookies onto the federal campaign trail and possibly all the way to 24 Sussex Drive.
The first CD will help you remake yourself so you’ll look and feel prime ministerial. Our sartorial experts will school you on how to dress for political success. Whether it’s a Brooks Brothers suit for a TV debate or a down-home jeans and plaid shirt outfit for an Alberta rodeo, you’ll always have that chief executive look.
And that’s not all. Our crack team of linguistic specialists will teach you how to dumb it down to sound just like “regular folk.” You’ll learn all manner of regional dialects and expressions that will make you the ideal drinking companion of average voters anywhere in Canada. From “how’s it going b’y?” to “beauty, eh?” to “screw those liberal bastards”, you’ll learn all the regional phrases that will have your audiences shaking their heads in agreement.
CD number two contains everything you need to know about policy, both domestic and foreign. Don’t know much about domestic issues and how government works? Not to worry. CD #2 is chock full of valuable lessons about the different departments of government and even tells you how a bill becomes law.
And that’s not all. We’ve got really smart people on our team who can tell you all you need to know about foreign policy. Things like where Uzbekistan is, what’s the capital of North Korea and who’s the chancellor of Germany. Plus we can provide you with suggested positions on everything from international terrorism to which new fighter jet we probably shouldn’t buy.
The third CD is all about name recognition: how you get known and stay known. We’ll teach you the tricks of the trade like taking an outrageous stance on one of the “control” issues be it gun, crime or birth. We’ll also show you how to use such time-tested techniques as the straw man argument, ad hominem attacks and the big lie.
The fourth and most important CD is all about the money. As you can imagine, running for prime minister is an expensive proposition. We’ll show you how to take advantage of private contributions, tax credits, per-vote subsidies and other mostly legal methods to get the millions of dollars you’ll need to create and broadcast all manner of attack ads aimed at your opponents.
If you act right now, we’ll even include a pamphlet with the most important fundraising information you’ll ever need. It includes the names and addresses of Canada’s top corporations and unions who are just waiting to offer you funds for your campaign in return for nothing more than a friendly word from you.
So don’t wait to take the plunge. If you want to win on October 19th, you’ve got to start campaigning now. Phone our toll free number 1-800-PMTODAY and have your credit card ready. For three easy payments of $99, you’ll be well on your way to achieving your electoral dream. And for the first 100 callers, we’ll even throw in a fifth CD with our favorite campaign blunders. From Joe Clark’s inability to add to John Turner’s “I had no option” to Stockwell Day’s wetsuit-wearing, Jet Ski-riding press conference to Kim Campbell’s “an election is no time to discuss serious issues”, you’ll know just what to avoid saying or doing on your way to 24 Sussex Drive.
Posted by David Martin at 11:11 AM No comments: