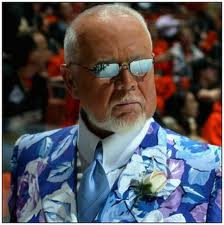 In an event rarer than a solar eclipse, Don Cherry has apologized. After tearing a strip off former tough guys Stu Grissom, Chris Nilan and Jim Thomson, calling them “hypocrites”, “pukes” and “turncoats”, the “Hockey Night in Canada” blowhard took it all back.

At first it was assumed that the apology was sincere and heartfelt. But given the threatened legal action by Messrs. Grissom, Nilan and Thomson, it appears that Mr. Cherry’s ‘mea culpa’ was more motivated by fear of financial loss than sincere regret. In fact, some other threatened lawsuits may explain these additional unexpected apologies from hockey’s most colorful commentator:
Swedes
“I truly regret calling various Nordic hockey players ‘chicken Swedes’,” said Mr. Cherry. “I don’t know what I was thinking. Those guys are tough and can really play hard.” Cherry denies that his about face had anything to do with a cease-and-desist letter he received from the Stockholm law firm of Peterssen, Petersson & Pedersson. “I was wrong,” said Cherry. “Any of those guys can go into a corner with a dozen eggs in their pocket and some of them would definitely break.”
Ron MacLean
"Cripes, did he really think I was serious with all my comments about him?”, said Cherry. “I was just kidding around, that’s all.” Apparently MacLean could take no more and engaged the services of the Toronto law firm Bleedum Drye to make his case. “OK, so he’s not a sniveling little butt kisser,” said Cherry. “If that’s what he needs to hear to make this lawsuit go away, then so be it.”
Bobby Orr
“This one breaks my heart,” said Cherry. “I love the guy; I really do and now I’ve gotta deny my love.” Apparently the greatest defenseman to ever play the game had reached his limit with expressions of love from his former pal Grapes. “It hurts to say it,” said a tearful Cherry. “But I apologize for any hugs, kisses or other expressions of affection directed towards Mr. Orr and I will never embrace or embarrass him again.”
The NDP
“I didn’t know that ‘pinko’ was a bad word,” said Cherry. “I just figured those bicycle riders like the color pink and that’s why you call them pinkos. I’m truly sorry for any offense I may have caused and I will never use that word again.” Asked to comment on the NDP’s platform and recent electoral success at the federal level, Don Cherry declined. “I’m staying mum when it comes to those guys although I think all you kids at home can guess what my real opinion might be.”
The Canadian Apparel Federation
“I can’t lie,” said Cherry. “This one really hurts.” The former Boston coach was talking about his apology to the entire Canadian menswear and fashion industry wherein he undertook to stop wearing any more outrageous suits and shirts. “I’m sorry if my clothing choices caused any damage to the haberdashery sector of this great country of ours,” said the style-challenged former coach. “I honestly thought I looked great in those outfits. Now I know better.”
Posted by David Martin at 3:11 PM No comments: 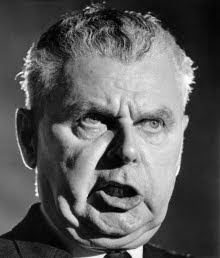 “A museum dedicated to John Diefenbaker has decided to give a man who suspects he's the former prime minister's only child access to its artifacts for DNA testing.”
- The Canadian Press - 16/9/2011
Toronto native George Dryden is on a mission to prove that he is, in fact, the illegitimate son of Canada’s 13th prime minister. If nothing else, Mr. Dryden’s feistiness and dogged determination suggest that he may well be John Diefenbaker’s son.
But it turns out that Mr. Dryden is not the only potential illegitimate child of a recent Canadian leader. Rumor has it that the following people may also have illegitimate links to 24 Sussex:
Fred Wilson
This Ottawa native may be the love child of former prime minister Joe Clark. One anonymous source suggests that the polite, soft-spoken thirty-one-year-old was conceived on December 13, 1979, the very day that Mr. Clark’s minority government was defeated, nine months less a day since he took power. At the time, Mr. Clark’s defeat was blamed on his inability to do math but instead it may have occurred because of a secret assignation with one Enid Wilson in the Parliamentary cloak room. Nine months less a day later, Ms. Wilson gave birth to a baby boy with a distinctive receding chin.
Unlike George Dryden, Fred Wilson has not made any attempts to establish his true parentage. “Mr. Clark seems like a very nice man,” said Mr. Wilson. “And I assume he’s very busy. It wouldn’t really be right to bother him about such a minor matter, would it now?”
Gilles Lalonde
The 26-year-old from Montreal apparently has a strong case for claiming Brian Mulroney as his father. Not only is Mr. Lalonde the spitting image of Canada’s 18th prime minister, his mother, former Mulroney housekeeper Giselle Lalonde, has confirmed a brief relationship with her former boss.
Yet Mr. Lalonde has not pursued the matter further. In fact, the smooth-talking, lantern-jawed Montrealer has adamantly denied that Mr. Mulroney is his biological father. “I’ve got a nice little restaurant business here in Montreal,” said Mr. Lalonde. “If it was ever established that I’m a Mulroney, I could lose half my customers overnight. I’ve got nothing against the guy but, heck, I’ve gotta make a living.”
Phyllis Smith
Calgary is home to this 21-year-old aspiring accountant who, with her ski-slope nose and slight midriff bulge, bears an uncanny likeness to our current prime minister. DNA testing has, in fact, established that Ms. Smith is Stephen Harper’s daughter. However, since Phyllis Smith’s mother Brenda has adamantly denied being even a ten-foot pole length away from Mr. Harper, the biological connection was, until recently, a mystery.
“My mom says she’d rather sleep with a rattlesnake than Stephen Harper,” said Phyllis Smith. “And I believe her.” But there is a simple explanation. It turns out that there was a slight mixup with donor samples at a Calgary fertility clinic 22 years ago and the rest is history.
Jacques Strappe
Shawinigan native Jacques Strappe has long believed that he might be distantly related to Canada’s 20th prime minister Jean Chretien. After all, Mr. Strappe bears a definite resemblance to Mr. Chretien and has the same inability to speak either of Canada’s official languages. But he never guessed that he might actually be a son of the former prime minister.
“For me, pepper, I put it on my plate and I don’t mind if it’s proved that I’m Mr. Chretien’s son,” said Mr. Strappe. “A proof is a proof. What kind of proof? It’s a proof. A proof is a proof. And when you have a good proof, it’s because it’s proven.”
Kim Turner
Perhaps the strangest possible prime ministerial love child is Kim Turner of Vancouver, B.C. Rumor has it that Ms. Turner is not just the child of one prime minister but is, in fact, the spawn of two prime ministers.
Historians have often wondered how Kim Campbell managed to decimate a majority Tory government and reduce it to two members in the House of Commons back in 1993. Apparently her illicit affair with former prime minister John Turner and subsequent unreported pregnancy was the distraction that cost her and her party the election.
While the evidence of her twin prime ministerial parents is overwhelming, Kim Turner strongly denies any connection. “Hey,” said Ms. Turner. “Would you admit that you were related to those two losers? Let’s face it, I was in the womb longer than the two of them combined were prime minister.”
Posted by David Martin at 4:14 PM 1 comment: 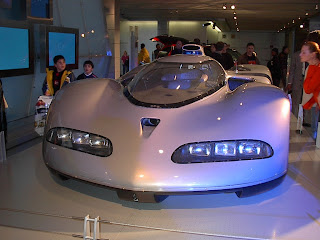 MEMO
TO: Earl Stuckley, CEO, U. S. Motors
FROM: Charles Miller, VP Marketing
I regret that it’s come to this. I had hoped that our ongoing disagreements with the production and engineering departments could be resolved through normal channels. But now it is clear that the impasse is so intractable that it requires your involvement.
For years now, our employees in the marketing branch have gone above and beyond the call of duty to bring our company into the 21st century. We have spent countless hours creating and designing marketing plans that will ensure our continuing profitability and long-term success.
Unfortunately, the engineering and production folks refuse to cooperate in the implementation of even our simplest idea. And, as you know, if we don’t have a product to match our advertising campaign, we don’t have a hope of increasing sales.
The various divisions of a company are not competitors. Rather, we are all members of one team — a team whose singular goal should be corporate success.
We have done our part; now we urge you to get the other departments onside as well. All that means is to design and produce a car to match our sterling marketing campaign.
They say it can’t be done but if we can dream it, whey can’t they produce it? Our TV ads touting our new H2O-powered SUVs have tested off the charts with consumer focus groups. Is it too much to ask the geniuses over in engineering to come up with just one vehicle that runs on water?
As for price points, if we expect to stay competitive with the Japanese, we need a family van that comes in under $10,000. And that means one with all the bells and whistles, too, including cup holders and a DVD player. Our print ads are ready to go with an MSRP of $9,999. Anything higher and we’re destined for failure. Just because those wacky number-crunching pencil pushers over in accounting say it can’t be done is no reason to pull the plug on this project now.
We’re no less adamant about our proposed multi-media campaign for the Pegasus — the world’s first affordable flying family sedan. We appreciate that cutting edge technology like this can’t be produced overnight. But if the production guys can’t even commit to a 2014 model, all our work on a combined Facebook-Twitter-YouTube rollout will be for naught.
Frankly, we here in marketing are tired of carrying the load for U. S. Motors. Great ideas don’t come cheaply and they don’t come along every day either. If the bright, creative minds in our shop don’t at least occasionally see a practical realization of one of their brilliant outside-the-box concepts, we’re going to lose some of our top marketing people to the competition.
We don’t want to be unreasonable. We recognize that marketing may have a monopoly on the best and the brightest. So we accept that the water-fuelled SUV and the flying sedan may have to be delayed a bit.
But in the meantime, we feel the least we can expect from our coworkers is a piddling 75 miles-per-gallon, $12,000 subcompact with automatic driver-less operation and self-cleaning option. We can roll out an ad campaign for this in three to four months. Can production at least match us on that?
I hope we can count on your support as I know you are a can-do kind of guy who is not going to take “It’s physically impossible to build a 75 m.p.g. car for $12,000" as a legitimate excuse for more heel dragging. If you can light a fire under the other departments, we’re ready to fan those flames into a brushfire of sales success.
Yours in motoring,
Chuck Miller
Posted by David Martin at 4:58 PM No comments: