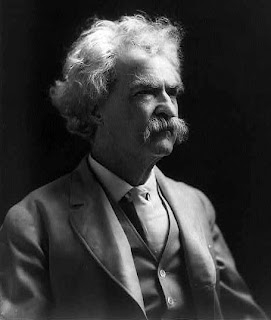 The Weeper of the House 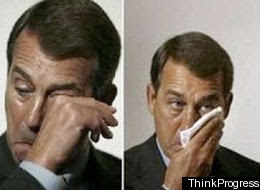 "He [John Boehner] doesn’t cry when he cuts the grass. He doesn’t cry when he doesn’t get a putt."
- Mrs. Boehner quoted in the N. Y. Times - Jan. 5/11
Representative John Boehner has recently demonstrated a propensity for tears. Mr. Boehner turned on the waterworks after the Republicans’ victory in the midterm elections, during an interview on the show "60 Minutes" and earlier this week when he took over as the new Speaker of the House of Representatives.
The question becomes: Will Mr. Boehner continue this pattern of lachrymose displays? Apparently yes if these informal prognostications are true:
January 27, 2011
Thanks to the Speaker’s efforts, the House of Representatives passes a bill to repeal President Obama’s cherished health care legislation. Announcing the result, Mr. Boehner mists up and then engages in a full-on crying jag. "It’s just such an emotional moment," says Boehner. "Having worked my way up from a hardscrabble beginning, I know how important it is for all Americans to experience the same journey. That’s why I think it’s important that they do so without the government interfering and insisting that they have health insurance."
February 14, 2011
It’s Valentine’s Day and John Boehner starts crying after lunch and keeps crying for the rest of the day. "It’s not surprising," says his wife Debbie Boehner. "He’s such an emotional man and such a big softie. Valentine’s Day is special for him as it reminds him of the deep love he has not only for his family but also for this great nation of ours." When asked if it might also have something to do with the Senate’s overwhelming rejection of his bill seeking to repeal Obamacare, she demurs and claims that her husband is distraught every year on the 14th of February.
May 15, 2011
Given that the House Speaker hits the links over a hundred times a year, the fact that he was playing a round of golf today at the Congressional Country Club near Washington, D. C. with three lobbyists was not unusual. But what was unusual was the American bald eagle that happened to fly over just as Mr. Boehner missed a five-foot putt on the 17th green. "I didn’t want to cry," said Boehner. "But the sight of that noble symbol of all that is right about America reminded me of my humble roots and the hard work that brought me to this 17th green." So for the first time ever, Mr. Boehner cries when missing a putt.
July 4, 2011
John Boehner takes some time to be home with his family in West Chester Township, Ohio and decides to mow the lawn late in the evening of the 4th. Mr. Boehner starts to mist up while mowing just as the local fireworks ceremony begins. "It was just so moving," said Mr. Boehner. "The warm Ohio night and a sky full of American-made fireworks was more than I could take. It reminded me of my childhood and how far I’ve come in my American journey." So for the first time ever, John Boehner cries while mowing the lawn.
November 6, 2012
Speaking to the American people after the final 2012 election results, Mr. Boehner once again sheds more than a few tears. "It’s just so touching to see the American democratic process at work," says Boehner. "It reminds me of why I am proud to be a self-made man in America." Boehner’s aides deny that their boss’s tears have anything to do with the Republicans’ loss of the House of Representatives and the reelection of President Obama.
Posted by David Martin at 3:20 PM No comments: