Pipeline! - The Board Game 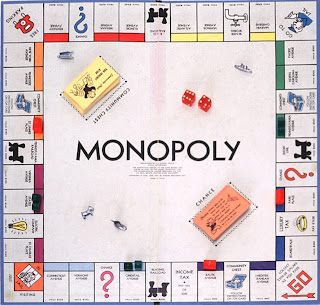 With increasingly sophisticated programming and graphics, video games are more popular than ever. Sales of such titles as “Halo” and “Call of Duty” are in the millions.

So it might come as a bit of a surprise to find that there has been a recent resurgence in sales of the old-fashioned board game as evidenced by these recent new offerings:

Majority
Loosely based on the game Monopoly, Majority has a board with ten provinces and three territories. Game pieces include the Tory, the Liberal, the Socialist, the Green and the Separatist.   Using their initial monetary outlay, players try to buy up as many seats in each jurisdiction as they can until one of them reaches the magic number of 155 at which point everyone else gives up until the next round of play in about four years.

Pipeline!
New from Hasbro, this game challenges players to build a pipeline from the Alberta Tar Sands to a viable market end point. Roll the dice and head in the direction of your choice.
The simplest routes are often the hardest to complete. Try laying pipe south and you may end up getting blocked by environmental dead ends or by drawing the Obama card.
“Go west, young man” seems like an easy choice, too, unless you land on the Christy Clark square that requires you to give up 75% of your revenues. Slow and steady may win the game if you choose to head east but only if you can find a way to bypass the greedy Quebec monster.

Senate Reform
Open up the board and you’ll find a crazy quilt legislature populated by patronage appointments and out-of-control spenders. Each player is dealt a hand of five cards he can use to try to reform this unruly mess.
The challenge is to play the right card at the right time. The Triple-E card sounds great unless you happen to gain a Parliamentary majority. Then you might prefer to simply stock the Senate with members of your own party.
The Abolition card is everyone’s favorite but thanks to the complicated constitutional rule book, it’s almost impossible to play. Players typically choose instead to use the Procedural Change card but seldom get past all the provincial roadblocks on the board.
One lucky player will end up with the Appointment card which ensures a six-figure salary, a pension for life and the end of any more talk of Senate reform.

Cabinet Shuffle
Mattel has introduced their latest board game based on the time-honored practise of changing the federal cabinet. A deck of 163 cards is shuffled and dealt out to the players. The center of the board has spaces for 38 ministers and one prime minister.
The object of the game is to get as many of your cards into the center spots as possible. The winner is the player with the most ministerial spaces covered. Extra points are awarded for occupying the most central spots such as Finance, Defense and Foreign Affairs.
The game ends when one player reveals and plays the prime minister card which renders all the other cards useless.

Clueless
Parker Brothers has adapted their famous board game Clue to incorporate the latest Canadian political scandal. Rather than different rooms, Clueless has a board featuring different residences. Each player chooses one of the playing pieces identified as Mike, Mac, Pam and Pat.
A single die is rolled to advance players across the board where they try to claim two residences at once. As they move from residence to residence, they adopt different reasons and excuses for claiming extra expenses. Unfortunately, unlike in the parent game, the players have no clue.
Posted by David Martin at 11:14 AM No comments: