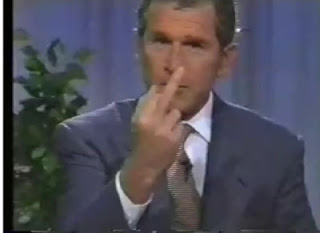 For those wondering what George W. Bush has been up to since leaving office, wonder no more. The former president has been busy preparing an all-out marketing campaign to secure his place in history.
"I know a lot of people have criticized my administration," said Mr. Bush. "Some say that I was the worst U. S. president in history. Personally, I think that’s just not fair."
"Sure, it’s easy to find fault with my record," continued the ex-president. "After all, when I first took office, the Dow was at 10,700, the unemployment rate was 4%, politicians were wondering how to spend a projected one trillion dollar surplus, the Twin Towers were still standing, there was no axis of evil, North Korea was complying with its treaty obligations, Saddam Hussein wasn’t bothering anyone and Osama bin Laden’s whereabouts were known."
"But that’s not necessarily a fair assessment of my time in office," said Mr. Bush. "When you take a gander at some of those other fellows, I think I come out looking pretty good. Well, maybe not pretty good but not as bad as some."
Asked to identify who might rank below him on the list of former presidents, Bush pointed to Warren G. Harding and James Buchanan.
"From what I understand," said Mr. Bush. "Those two guys really sucked. And what about that Harrison guy who died after only one month in office? For sure I was better than him unless you think doing nothing beats my eight-year record."
Apparently Bush’s marketing campaign will center on the fact that he was able to win reelection and serve two full terms.
"Whatever you think about me," said Bush. "I did serve two whole terms so that’s gotta count for something. As far as I’m concerned, that at least qualifies me for the title of worst two-term president of all time. And given LBJ’s withdrawal, Nixon’s resignation and Clinton’s blow job, maybe I’m not even at the bottom of that list."
As with any marketing campaign, Bush’s upcoming effort will have a fall-back position.
"If historians don’t want to call me the worst two-term president of all time," said Bush. "Then maybe they can at least consider the alternative, namely the third best president of the 21st century. Trust me; I can live with that."
Posted by David Martin at 12:25 PM No comments: 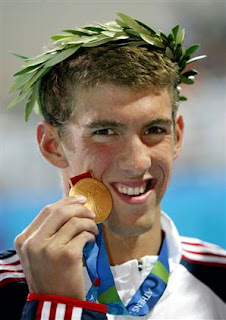 In a surprise about-face, Michael Phelps has retracted his recent public apology. Upon further reflection, it appears that the Olympic gold medallist was not sorry at all about getting caught smoking pot.
"I’ve had some time to think about it," said Phelps. "And I’ve decided that it was hypocritical of me to apologize for taking a couple of hits off a bong. The long and the short of it is, I like smoking pot."
It turns out, however, that the champion swimmer may have had another reason to backtrack on his earlier mea culpa. Questioned about his current endorsement contracts, Phelps was initially somewhat circumspect about discussing details.
"I’m sorry that Kellogg’s no longer wants to have me as their spokesman," he said. "But, let’s just say, I’ve recently managed to snag a few lucrative deals to replace them."
Inside sources have revealed that Phelps will soon be the public face of a whole slew of edible products from Cheetos to Oreos to Ben & Jerry’s ice cream.
"I can’t really comment until the deals have been finalized," said Phelps. "But you have to admit that they all make a perfect fit with my newly-revealed lifestyle."
Negotiations are also ongoing with other makers of consumer products such asApple’s iTunes, Zig Zag rolling papers and an undisclosed Chinese manufacturer of lava lamps.
"Quite frankly," said Phelps. "I hadn’t really thought through the upside of me just being me. Sure, I like corn flakes but not that much. At least not until I put some chocolate sprinkles and mini-marshmallows on them and I’ve had a toke or two, if you know what I mean."
Preliminary discussions have reportedly also begun with manufacturers of various speciality products.
"Until all this apology business happened," said Phelps. "I would never have considered endorsing some things. Take Visine, for example. I’m a competitive swimmer, you know, and swimming pools are full of chlorinated water. Who better than a champion swimmer to endorse something to get the red out?"
No word yet on any offers from Betty Crocker brownie mix.
Posted by David Martin at 9:11 AM No comments: 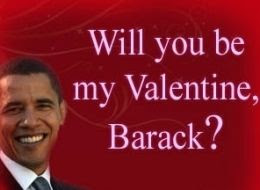 It’s Valentine’s Day and millions of folks will be giving one another cards, including America’s political leaders. Here’s a sneak peek at some of this year’s offerings:
Rod Blagojevich to Oprah Winfrey
They say I’m really guilty,
They say I’ve been impeached.
I wish that I had offered you,
That vacant Senate seat.
Visit me in jail, Valentine?
Dick Cheney to George W. Bush
How do I love thee?
Let me count the ways.
From the no-bid contracts
To the unencumbered power,
You gave me eight wonderful years
I never would have known.
I’m glad we picked you in 2000, Valentine.
George W. Bush to Barack Obama
Sorry ‘bout the national debt,
Afghanistan, Iraq.
But now they all belong to you,
And I won’t take then back.
Thanks new guy Valentine.

Barack Obama to Joe Biden
I really, really like you,
You are my special friend.
But if you won’t shut up dear Joe,
Our friendship’s at an end.
Please be my quiet Valentine.
Sarah Palin to John McCain
Roses are red,
The campaign is through.
The next time I run,
It’ll be without you.
You betcha, Valentine!
John Edwards to Elizabeth Edwards
I’m sorry that I cheated,
And for my indiscretions.
At least I always wait until
Your cancer’s in remission.
Sorry about that, Valentine.
Hillary Clinton to Barack Obama
I wanted to be President,
But I lost and that is sad.
But despite what Bill is saying,
Secretary’s not so bad.
See you in 2012, Valentine.
Bill Clinton to Hillary Clinton
My luve’s like a White, White House
That’s vacant in four years.
My luve’s like a yearning
That’s still unmet, I fear.
If fair thou art, my darling wife
You’ll surely let me try
To help you win the Presidency
And be the first First Guy.
Please be my co-executive Valentine.
Posted by David Martin at 3:04 PM No comments: 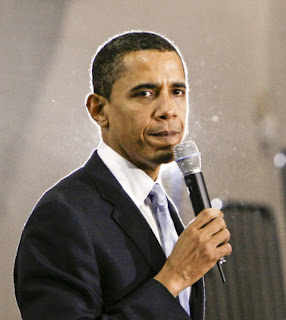 In the first major test of his presidency, Barack Obama was today faced with the aftermath of a giant stimulus package that has decimated the American heartland. In an evening television broadcast, the President addressed the nation:
It is with a heavy heart that I speak to you tonight in the wake of this terrible tragedy. It appears that the financial stimulus package that I helped to create has mutated into a dangerous creature that has devastated all areas of the country.
Reports are still streaming in but it is now clear that no region has been untouched by this giant financial instrument. Banks in every corner of our land have reportedly gorged themselves on the package’s unrestricted lending provisions, leaving them so bloated that they are unable to issue credit to ordinary Americans.
This terrible monster has also affected virtually every state in the Union with its unexpected add-ons, earmarks and pork barrel grants. Instead of issuing funds to stimulate the economy, this horrible creature has dumped untold billions of dollars on useless projects wherever federal legislators reside.
When I first introduced the package to the Congress, I assure you that it was a benign creature whose only intention was to boost the economy in a fair and non-partisan fashion. But unfortunately, by the time it had travelled from the House to the Senate and back, it had somehow grown to a gigantic, unwieldy, mutated hodge-podge of patronage spending.
Once the creature reached my desk for signature, I have to admit that I was afraid to challenge it. Given its width, breadth and strength, I knew a mere veto would not have been enough to strike it down.
Frankly, I feared for the consequences. Yet I hoped against hope that if I released this monster into the land, at least some good would come of its myriad provisions. Now I know I was wrong.
My fellow Americans, there is little we can do now to halt the destructive path of this financial monster. Sadly, we have no choice but to let it do its worst and eventually it will deplete itself and fade away. But until it does, we must quickly take measures to repair the damage done by creating a new, better, more efficient stimulus package.
I urge you and Congress to work with me to try once more to give away more billions to help truly heal our financially troubled nation. With your help, maybe - just maybe - we can get it right this time. After all, as they say, third time’s a charm.
Posted by David Martin at 10:14 AM No comments: 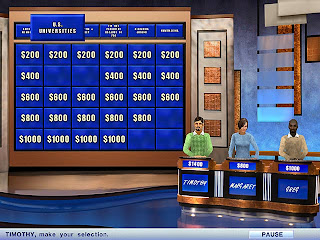 After the recent Presidential Inauguration, we all know what happens to the political winners. But what of the losers? Where do they go? Apparently some end up on a politically-themed edition of the quiz show Jeopardy:
ALEX TREBEK: Hello and welcome to a special Vice Presidential losers edition of Jeopardy. All week, you know that we’ve pitted different unsuccessful Vice Presidential candidates against each other in several hard-fought elimination rounds. Some of the candidates like Bob Dole and Jack Kemp failed to advance likely due to creeping senility. Others like Joe Lieberman and Geraldine Ferraro played great games but ultimately fell short. And some like Walter Mondale and Edmund Muskie were less successful probably due to the fact that they’re dead. All of that to say our three remaining contestants in the championship round are Sarah Palin, John Edwards and Dan Quayle. Sarah, the first selection goes to you.
SARAH PALIN: You betcha, Alex. I’ll take "Swords" for $100.
ALEX TREBEK: That’s "S-words", Sarah. Anyway, the answer is: "One of two directional indicators that forms the first word in the name of two U. S. states." Sarah?
SARAH PALIN: What is "down", Alex?
ALEX TREBEK: No, I’m sorry, that’s incorrect. Dan Quayle?
DAN QUAYLE: What is "west"?
ALEX TREBEK: No, that’s not right. John?
JOHN EDWARDS: As a former two-term senator and longtime resident of the great state of North Carolina, I’d like to say: "What is "south", Alex?" And, by the way, Rielle Hunter’s baby is not mine.
ALEX TREBEK: That is correct and please phrase your answer in the form of a question and refrain from extraneous political asides. John, you have control of the board.
JOHN EDWARDS: Alex, I’ll take "Alaska" for $300.
ALEX TREBEK: OK, the answer is: "This country has a contiguous land border with Alaska." I believe Sarah buzzed in first.
SARAH PALIN: "What is Russia with Putin rearing his head over the horizon and all?"
ALEX TREBEK: No, that’s wrong. Dan?
DAN QUAYLE: I’ll take "Different spellings of potato" for $200, Alex.
ALEX TREBEK: No, Dan. You were supposed to provide a question for the last....oh, never mind. John?
JOHN EDWARDS: Seriously, like Michael Jackson said, the kid is not my son. I don’t even know anyone named Rielle.
ALEX TREBEK: No, no, no. The correct response, if anyone cares, is " What is Canada?" Before we do any more damage, I’m going to stop this contest, declare John Edwards the winner with a grand total of $100 and pour myself a tumbler full of Scotch. Good night.
Posted by David Martin at 9:09 AM No comments: