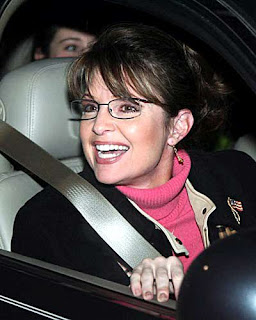 Sarah Palin has not ruled out a run for the presidency in 2012. Speaking on Fox News after her appearance at the National Tea Party Convention in Nashville, the former Alaska governor said she would run "...if I believed that that is the right thing to do for our country and for the Palin family."
But apparently there are a number of hurdles Ms. Palin must get over before achieving the Republican nomination two-and-a-half years from now. First and foremost is her unique and sometimes incomprehensible speaking style.
"With the necessity of putting ideas out there for the American people and all," said Palin. "It’s crucial that sense can be made of at least some of the talking points that I might be speaking at any given time."
Talking points turns out to be another area that Governor Palin recognizes that she needs to work on. She accepts that it is not going to be sufficient to simply continue referring to "death panels", "gotcha journalism" and "the media elites." To that end, Ms. Palin has reportedly embarked on a crash course covering everything from foreign policy to healthcare to how many branches there are in the U. S. federal government.
"I think my weeks of study have paid off big time," said Palin. "As you may recall, after that Tea Party thing, I was almost able to specifically identify which of Obama’s policies I thought were wrong. It’s only a matter of time before I nail at least a couple of ‘em."
Body language is another area the former vice presidential candidate is determined to improve. In particular, she wants to avoid excessive use of hand gestures when speaking.
"It’s not so much that I want to stop waving my hands around up there," said Palin. "It’s more that I don’t want to be exposing my talking points on the palms of my hands when I do."
Asked to comment on President Obama’s frequent use of a teleprompter, Palin was harshly critical.
"I think it shows a lack of intelligence and an absence of good, old-fashioned common sense," said Ms. Palin. "God gave us hands and we should use them, not only to emphasize the points one is making but also to have something to write those points on so’s not to forget them during a speech."
"I’ve got so many good ideas," said Palin. "That I just wish I had three hands so I could write them all down."
Asked if her lack of government experience would present an obstacle to a possible 2012 run, Ms. Palin dismissed that concern and glanced at her ink-stained right hand bearing the words "published author" on it.
"If I can get someone to write a bestselling book for me," she said. "Surely I can find someone to help me run Washington if I should win."
Posted by David Martin at 3:17 PM No comments: 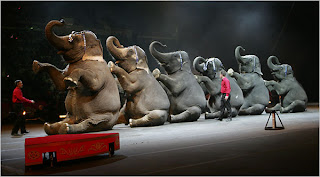 In true bread and circuses fashion, Prime Minister Harper asked that Parliament be prorogued, in part, because he didn’t want Canadians to be distracted during the upcoming Winter Olympics. But since most of us can walk and chew gum at the same time, Mr. Harper may want to reconsider and reconvene Parliament in February so we can continue to also view Ottawa’s own political winter games featuring unique events like these:
hooky
It sounds like hockey but it’s not. It’s hooky, the ongoing sport of Canadian federal parliamentarians. Whether it’s skipping out on House debates, passing up committee hearings or proroguing Parliament to avoid working at all, members of all parties know how to play this game. If not doing one’s job were an Olympic sport, Canada’s legislators would be perennial gold medal winners.
speed talking
If there’s one thing Canadian parliamentarians excel at, it’s talking and our MPs are especially adept at speaking quickly and from both sides of their mouths. The very best can combine those skills while also avoiding any meaningful statements. Long-winded MPs tend to compete in the one-on-one long track event while those who specialize in quips, insults and putdowns prefer the more raucous short track event also known as Question Period.
snowjobbing
Whether it’s the half-truth, the coverup or the flat-out lie, parliamentary snowjobbers are skilled at a multitude of deceptive moves. Like snowboarders, snowjobbers manage to twist, slide and turn themselves inside out while still somehow maintaining their position. But snowjobbers do have one advantage over their outdoor counterparts: when the competition gets tough, they don’t bail; they just ask for a do-over which they call "proroguing it, dude ."
party jumping
Definitely the most dangerous of parliamentary sports, party jumping is politics performed without a net. Also known as floor crossing, this event symbolizes both the agony and the ecstasy of political sport. The successful party jumper can end up with a government gold medal known as a "cabinet position." But, as in ski jumping, if the competitor doesn’t hit the take off just right, his career may nosedive in one spectacular tumbling crash.
bicameral reform
Like the biathlon, bicameral reform involves two sports in one. Members of Parliament perform their ongoing legislative duties while at the same time suggesting various reforms to the Senate. Like the biathlon’s rifle-shooting skiers, it takes nerves of steel for MPs to stop legislating and intermittently propose any one of a dozen impossible changes to the Red Chamber. From the triple-E spouting participants to the outright abolitionists, it’s unlikely anyone will ever finish this race.
stooge
It sounds like the daring winter sledding event called the luge and the similarities are striking. Parliamentarians compete to see how fast they can take an economy already flat on its back completely downhill. Like lugers, stooges can’t see where they’re going or where they’ve been and can’t stop the downhill trend. Unlike their Olympic counterparts, however, they make sure they’re well rewarded no matter how poorly they perform.
whirling
Curling may be the roaring game but Parliamentary debates are the boring game as they go round and round and ultimately nowhere. With MPs trying to sweep issues under the rug and looking to empty the House, everyone wants to skip the current session and no one seems capable of taking the lead. If you think curling is an instant cure for insomnia, try an hour of whirling debates in the House of Commons for a truly remarkable soporific.
Posted by David Martin at 3:47 PM No comments: 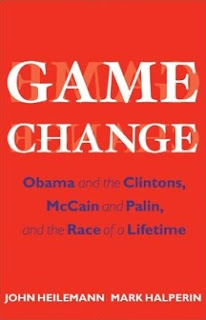 The new political tell-all book "Game Change" reveals a number of faux pas from the 2008 presidential campaign including racist remarks by Senate Majority Leader Harry Reid and anti-Bill comments by Hillary Clinton. But apparently there was even more to tell as shown by these further campaign revelations:
Sarah Palin
Unknown to most, the Republican vice presidential candidate is actually an intellectual autodidact and a top-flight foreign policy expert. Forced to play the dumb brunette, the former Alaska governor chafed under the "dumb it down" restrictions imposed by the McCain camp. "I would have liked nothing better than to fully explicate my vision for a tripartite American hegemony with Katie Couric," said Ms. Palin. "But I was told not to even admit to reading any magazines."
Barack Obama
Touted as the perfect embodiment of a post-racial America, it turns out that Barack Obama wasn’t perfect either. While on the hustings, candidate Obama repeatedly referred to his coterie of advisors as "my white-skinned Caucasian caucus" and mocked their tendency to speak like Harvard intellectuals. "I have since apologized to my team," said the President. "And informed them that, in fact, I think that they sound more like Mitt Romney."
John McCain
It turns out that the erratic and irascible behavior of the Republican presidential nominee was not a personal choice but instead was the result of age-related hormonal imbalances. "Believe me, at heart, I was still America’s biggest maverick," said the Arizona senator. "And not America’s biggest dick." To those who doubt this explanation, McCain points to his current dickish and obstructionist moves regarding healthcare and finance reform in the Senate.
Joe Biden
When asked about any additional previously unreported miscues from his 2008 vice presidential campaign, Joe Biden said: "Oh, yeah, there were plenty more screw-ups but Barack has asked me to zip my lip for now. I’m just going to stick to my current screw-ups for now."
Tiger Woods
One person who apparently does want to talk about his role in the 2008 presidential campaign is Tiger Woods. The world famous golfer, who has been noticeably reticent to talk about his extracurricular activities of late, was completely forthcoming about his political activities in the fall of 2008. "I’d like to be completely honest about my involvement in the presidential race," said Woods. "I had absolutely nothing to do with either campaign. Heck, I didn’t even vote."
Jay Leno
Talk show host Jay Leno points to errors by NBC executives during the 2008 campaign that damaged his career. "It wasn’t just the stupid decision to move me to the 10 P.M. time slot," said a disgruntled Leno. "It was also their insistence that I not sleep with my female staffers." To those who say he would be crazy to leave NBC, Leno repeatedly replies: "Crazy? Yeah, crazy like a FOX!"
Mickey Mouse
Everyone noted that the venerable Hollywood icon turned 80 during the last presidential campaign. But what the public didn’t see was a once proud star repeatedly embarrassed by the pejorative use of his name by both sides in the race. "I don’t think people know how much it hurt to have Democrats and Republicans alike refer to the other side’s tactics as Mickey Mouse," said the animated rodent. "Even my old pal Ronald Reagan didn’t have to put up with that kind of abuse."
Posted by David Martin at 10:23 AM No comments: