To date, Tiger Woods has not made a full disclosure about his alleged indiscretions. However, the following discarded first draft of a public apology obtained from seldom reliable sources suggests that one may be forthcoming soon:
Although I originally asked that all this be treated as a private matter, I now realize that I owe my fans an explanation. I consider that to be a fair way to deal with my situation.
As long as I can remember, golf has been my life. No matter how rough the path or how tough the lie, I have always tried to shoot straight and avoid the bunkers.
It is with that attitude that I address you today. While it is true that I recently landed in a few traps, I assumed that I could scramble and avoid further hazards.
I now have to admit to ending up with an unplayable lie. Given that unfortunate occurrence, I was hoping to be granted a relief or at least be allowed to simply play through.
I recognize that what I have done may have been out of bounds. All I can say is that I hope you can forgive me and gimmie a free drop.
I acknowledge that I have let you the fans down. I had a reputation to uphold and I clearly did not read the green properly. Despite my penchant for the double D and holing out, I should have kept my putter true and left my ball at home.
Although I am famous for my long game, especially on the back nine, that’s no excuse for not adopting an open stance. Yes, I like my tip stiffness on the harder side and I can usually be counted on for a spectacular woodie or two each round. But just because someone has an itch doesn’t mean he should scratch it.
I think you’ll agree that I’m known for coming up big when there’s a trouble shot. Whether it’s nailing a wind cheater off the tee or holing a snake from sixty yards, I’ve never been known as a sand bagger.
So these latest accusations sting like a triple bogey on the first hole of a playoff. But please forgive me and I promise that, from now on, I’ll keep my wood on the course and my balls in my bag.
Posted by David Martin at 9:35 AM No comments:

In a late breaking development in the ongoing Tiger Woods scandal, "The National Enquirer" has asked for a federal bailout.
"We’ve held off going hat in hand to the government as long as we could," said Managing Editor Frank Lee Prurient. "But we’ve kind of hit the wall on this Tiger Woods thing."
Apparently The Enquirer is not rolling in dough as many thought. Taking on the investigative duties formerly performed by the mainstream media has inflicted a heavy financial toll.
The Tiger Woods story appears to be the straw that broke the tabloid’s fiscal back. Although the initial disclosures did not cause too much of a burden on the paper, the escalating stream of revelations has threatened its ongoing viability.
"Look," said Prurient. "We can handle two, three, maybe even four or five mistresses coming forward. But once we get past half a dozen bimbo eruptions, it’s a real strain on our bottom line."
Luckily for The Enquirer, the federal government recently announced that not all of the huge bank bailout fund will need to be used. That leaves $200 billion or more available for public works, job creation and support for other industries in financial peril.
"I think we qualify on all three counts," said Prurient. "All we need is one or two hundred million dollars," said the managing editor. "That’s a drop in the bucket for the government’s TARP program but it would work miracles for us. Let’s face it; when you’re trying to track down the sexual partners of a billionaire like Tiger Woods, you need all the cash you can get."
President Obama has not commented yet on The Enquirer’s request but is reportedly cool to the idea. An unidentified White House spokesperson has instead suggested some of the bailout money be spent on identifying women who have not slept with Tiger Woods.
"In the long run, we think it would be a wiser allocation of government funds," said the anonymous source. "After all, it’s bound to cost a lot less to find out who hasn’t slept with Mr. Woods than to find out who has."
Posted by David Martin at 2:52 PM No comments:

What's Next For Oprah? 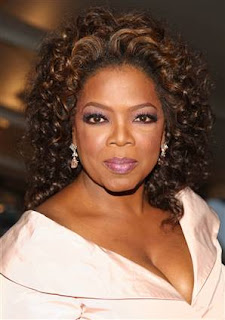 Let’s have some fun and try completing this sentence: "Oprah ends her talk show in 2011 and decides instead to....."
* Groom Sarah Palin as her talk show host replacement, the new show to be called "Simply Sarah."
* Take on Dave, Jay, Conan, et al. with the first late night talk show hosted by a woman since Joan Rivers’s ill-fated, short-lived run with "The Late Show" on Fox in 1986.
* Challenge Bill Gates, Warren Buffet and T. Boone Pickens to a high-stakes, winner-take-all poker game for financial domination of the free world.
* Open her own bookstore called Oprah’s Book Club.
* Buy Amazon.com and call it OprahsBookClub.com.
* Spend more time with her family.
* Adopt a third-world orphan and give him or her a new life.
* Adopt a small, third-world country and develop it into a member of the G20.
* Eat anything she damn well pleases for the next twenty years.
* Build her own theater in Vegas and perform two shows nightly with added weekend matinees until Celine Dion cries "Uncle!"
* Buy the Chicago Cubs and get them into the World Series.
* Establish a seniors’ home for retired (or should-be-retired) daytime talk show hosts like Phil Donahue, Jerry Springer and Montel Williams.
* Take as much time as necessary to get Stedman to stop calling himself a consultant and get a real job.
* Start calling herself Ms. Winfrey again.
* Replace Joe Biden as the Vice Presidential candidate on Barack Obama’s ticket for 2012.
* Replace Barack Obama on the 2012 ticket.
Posted by David Martin at 4:14 PM No comments: