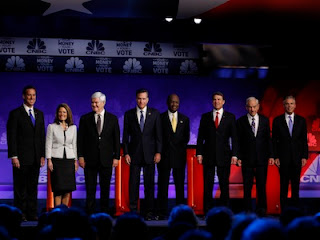 The next presidential election is almost a year away and already there have been a dozen Republican presidential debates with plenty more to come. Apart from their sheer number, perhaps the most surprising fact about these encounters is their high TV ratings.
In view of those ratings, rumor has it that at least three major TV networks are in a bidding war to make the debates an ongoing weekly series. Recently leaked draft scripts hint at what we can expect from future episodes:
Thursday, November 17th
Mitt Romney tires of endlessly debating and getting no bump in the polls. The former Massachusetts governor decides to take a pass on the next debate but doesn’t know how to do it without causing a big ruckus. Romney finally decides to announce a fake religious holiday on November 17th called the Mormon Day of Silence when the faithful must not speak for 24 hours. The candidate shows up anyway, keeps his vow of silence and sees his polling numbers double overnight.
Thursday, November 24th
All but counted out of the race, Rick Perry chooses to play to his strength: hilarious miscues. The Texas governor decides to become the leading Republican joker and walks onto the debate stage dressed as a Thanksgiving turkey. Perry stumbles, stutters and, when asked, is unable to come up with even one policy position. Leaving the audience in stitches, he declares himself America’s comedian-in-chief. Sadly, his presidential polling numbers keep falling although, on the plus side, his vice presidential numbers soar.
Thursday, December 1st
Herman Cain continues to battle allegations of sexual harassment and yet still retains high polling numbers. Figuring that denial equals success, the former pizza chain exec decides to deny unreported incidents of sexual misconduct, drugs and even money laundering. The other candidates are mystified as Cain’s numbers rise faster than warm pizza dough.
Thursday, December 8th
Ron Paul’s frustration at being a perennial also-ran finally shows through. The charisma-challenged candidate figures that if sex scandals helped Herman Cain’s standing, they can do the same for him. During the debate, Paul claims that he slept with seven women, two men and a goat ---- all at the same time. However, no one believes him and his numbers drop like Ayn Rand’s popularity at a socialists’ convention.
Thursday, December 15th
Seeing no movement in her campaign, Michele Bachmann takes a giant risk and dresses up as Sarah Palin for the latest debate. Neither her husband Marcus nor Newt Gingrich notices Bachmann’s transformation although Gingrich does become strangely aroused. At first, the crowd responds positively but when the disguised Bachmann continues to speak in mostly complete sentences, the ruse is revealed and the audience turns on her.
Thursday, December 22nd
In this Christmas episode, the debate regulars get a surprise visit from President Obama who joins the Republican presidential hopefuls on stage. When asked what he’d most like from Santa for Christmas this year, Obama replies: “World peace and ABM - anyone but Mitt.”
Posted by David Martin at 8:20 PM No comments: