The Church of O 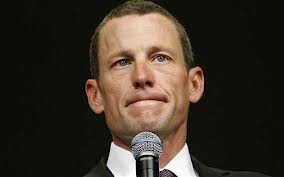 And so did the two-wheeled one enter the Church of O seeking forgiveness and redemption for his sins. For lo these many years, the Cycling King had reigned supreme throughout the land and also in France where he had toured seven times in triumph.
Many had doubted the power of the one called Armstrong despite his powerful sounding name. They badgered and hectored him and accused him of using unfair advantage to achieve his vaunted throne.
The Cycling King denied the charges claiming innocence and a pure heart. He said that he did not use rare physics and potions and was truly deserving of all the trophies and medals awarded unto him. Yet many still doubted and some even denied him his titles.
With nowhere else to turn, the one called Lance had but once choice left. The hour had come to visit Oprah, to unburden his soul and receive redemption from the great redeemer.
The Cycling King entered the well-lit confessional and sat before the great Oprah where he donned the robe of humility and the raiment of truth. Neither garment sat well upon him but he tried as best he could to make them fit.
Like many of his generation before him, Armstrong admitted his transgressions bringing forth tears upon his countenance. Yet the admissions seemed lacking in candor and Oprah admonished the Cycling King for his reticence and vagaries.
“It is a moment of high emotion,” said Oprah. “One tinged with regret, some truth and unbelievable ratings. But I sense you do not come before me in full confessional mode.”
“If you seek total absolution, my son, then you must prostrate yourself before me and make amends for the wrongs you have committed. As Rhianna and David Letterman and James Frey before you have done, you must lay bare your soul.”
Lance tried as best he could to be contrite. Alas, because of accusers in the courts of the land and in the courts of other lands, he was constrained from telling all he might have told.
“But even half a confession is better than none,” said Oprah. “And we will show the people the second segment of our meeting tomorrow night in hopes that you can reveal more and, in doing so, return my Neilsen ratings to their previous wondrous levels.”
And as Lance rose from his seat and readied himself to leave, Oprah reached out and touched him and gave him a partial blessing.
“It is the least I can do for a suffering soul,” said Oprah. “For you are trying and, in so doing, you have assured a return visit at some later date when we might once again bring millions into my Church.”

Posted by David Martin at 1:56 PM No comments:

Barry at the Hall 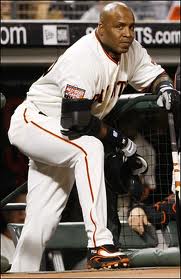 The outlook wasn't brilliant for the Steroid Three that day;
The Hall was there to enter if enough votes went their way.
But then when Sosa failed to make it and Clemens did the same,
A knowing silence fell upon the scriveners of the game.

A curious few got up to file their story early but as for all the rest
They wondered if he’d make it; they still could only guess.
They thought, if Bonds could score once more with his back against the wall
They'd put up even money, now, that Barry’d make the Hall.

Yet McGwire preceded Barry, as did also Timmy Raines,
And the former was a doper and the latter liked cocaine;
So upon that jaded press corps did apathy now fall,
For there seemed but little chance of Barry's getting in the Hall.

But McGwire nabbed almost a hundred votes to the wonderment of one,
And Raines the nose candy lover tripled that and some;
And when the press stopped voting and counted them forthwith,
There was McGwire set at 15th and Raines a-hugging fifth.

Then from over 500 ballots there rose a quiet scribble;
It sneaked right through the press room, a silent little dribble;
It sounded in the washrooms and echoed off the wall,
For Barry, mighty Barry, had a shot to make the Hall.

There was ease in Barry's manner as he stepped into his place;
There was pride in Barry's bearing and a puffed up steroid face.
And when, responding to the jeers,  he crushed a handheld ball,
No one could now doubt that Barry wanted in the Hall.

A thousand eyes were on him as he rubbed his hands with dirt;
Five hundred tongues naysayed him with his long-sleeved baseball shirt.
And when the sanctimonious writers held their pens aloft to vote,
The anger gleamed in Barry’s eye, as he struck a defiant note.

And now the first ballot votes came hurtling through the air,
And Barry stood a-watching them in haughty grandeur there.
Close by the sculpted batsman the votes unheeded sped-
"I’ll get them on the second," said Barry. "Strike one," the press corps said.

From the media, filled with voters, there went up a muffled roar,
Like the beating of the storm-waves on a stern and distant shore.
"Remove him from the ballot!" shouted someone on the tube;
But the rules said all votes counted no matter who the rube.

With a sneer of haughty arrogance great Barry's visage shone;
He dismissed the accusations and bade the vote go on;
He signaled to the writers, and once more the count began;
But second, third and fourth place votes were rare as curried ham.

"Fraud!" cried the maddened hundreds, and echo answered fraud;
But one scornful look from Barry and the writers were all awed.
They saw his face grow stern and cold, they saw his muscles flex,
And they knew that Barry thought he’d win despite his juiced-up pecs.

The sneer is gone from Barry's lip, his teeth are clenched in jest;
He pounds with cruel violence upon his pumped up chest.
And now the writers hold the ballot, and now they cast their vote,
And now the air is shattered by the scream from Barry’s throat.

Oh, somewhere in this sporting land these drugs are still in use;
The EPO is welcome and enforcement rules are loose.
And somewhere steroids are on sale and doping is the call;
But justice reins in baseball for Barry missed the Hall.

Posted by David Martin at 8:48 PM No comments: