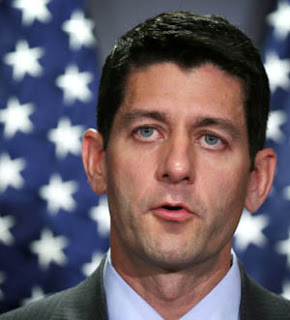 I’ve got a problem with Mitt Romney’s pick of Paul Ryan as his running mate. It’s not Ryan’s right-wing conservative views on things like abortion and gay marriage that bother me. Or even his far right budget proposal comprising tax cuts for the rich and benefit cuts for everyone else Heck, I can even accept that he’s a big fan of the uber-capitalist novelist Ayn Rand.


What I can’t accept, however, is that Mr. Ryan may not be a properly qualified vice presidential candidate. The Constitution says that you have to be at least 35 years old to serve as president or vice president. Media reports state that Ryan’s 42. But look at the guy. He doesn’t appear to be a day over 30.

Wikipedia says Ryan was born in Janesville, Wisconsin on January 29, 1970. I was 20 years old in 1970 and I don’t remember any birth announcement for a Paul Davis Ryan. Do you?

And Janesville? Is that even a real place? Sounds like a phony name to me.

I think it’s time that Ryan prove his real age. And not with some notarized copy of what is likely a phony birth certificate. Or some half-doctored, semi-photoshopped hospital document. We’ve been through that charade before.

Mr. Ryan, be a man and prove you’re 35 or older. Surely in this modern age there are home movies or videos of your birth. Let’s see some family archival material like a lock of your baby hair or a bronzed baby shoe that we can run some DNA or carbon-dating tests on. At the very least, I would expect affidavits from those present at your birth including any doctors or nurses on duty.

So far, we’ve seen absolutely nothing. All we have are a bunch of third-hand, hearsay statements that you were born in 1970 in a supposed town called Janesville. I’d like to trust Mr. Ryan on this point but I’d prefer some hard factual evidence. After all, even Superman tried to fool us for years claiming he came from Smallville.

Let’s get this issue out in the open before it’s too late and we end up electing a vice president who’s under 35 and a heartbeat away from the oval office. I urge patriots like Donald Trump, Sarah Palin and Rush Limbaugh to join my crusade and ensure that there will be no underage candidates for the nation’s second highest office. Let the birth day movement begin.
Posted by David Martin at 11:01 AM No comments: