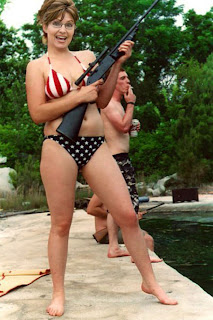 "Mattel plans to bring out versions of Barbie and Ken styled after four ‘Mad Men’ characters."
- The Globe and Mail - March 10, 2010
If all goes well with Mattel’s ‘Mad Men’ collector series, look for its new ‘Political Pals’ collection this fall including the following limited edition dolls:
Wasilla Barbie
Over the years, Barbie has kept pace with social changes and transformed herself into various career women. Now Mattel has taken Barbie to a whole new level: the conservative career politician. From her attractive appearance to her part-time political job to her ability to field dress a moose, Wasilla Barbie has it all. This is one of the rare talking Barbies although it only has a limited selection of catchy phrases like "You betcha!", "The mainstream media elites" and "Gotcha journalism."
Kloseted Ken
Based on men like Senator Larry Craig and California State Senator Roy Ashburn, Kloseted Ken is that strangest of political creatures: the homophobic homosexual. Dressed in a conservative blue suit, Kloseted Ken has a wild secret life that belies his anti-gay political stance. This doll comes with accessories like a wife, kids, a public men’s washroom stall and a government-issue car to drive him to the nearest gay nightclub.
Black Barry
Sensitive to racial issues, Mattel introduced Barbie’s African-American friend Christie in 1968 and a black male doll named Brad in 1981. In keeping with that trend, the company plans to include Black Barry in its upcoming fall collection. Black Barry is Barbie’s new African-American friend who just happens to be the president of the United States. Accessories include a white house, a trillion-dollar debt and a possible second term.
Hillary
Another in Barbie’s long list of female friends, Hillary is a fierce feminist. Burdened with a successful but philandering political husband, Hillary nevertheless was a successful politician in her own right. She once ran for president herself but sadly has now chosen to be a secretary. Accessories include a closet full of different colored pantsuits and an ankle monitor for her husband.
Kuddly Karl
Mattel has often been criticized for the unrealistic body image that Barbie dolls project. To help change that perception, the company plans to issue Kuddly Karl, a chubby, partially-balding middle-aged man. Karl is that most common of Washington political operative: the spin merchant behind the actual officeholder. In this case, Karl keeps spinning long after his principal has left office.
The Real Dick
In keeping with the trend to adopt more accurate body profiles, Mattel will also release its first vice presidential doll: The Real Dick. Dick spends his life in pursuit of conservative causes and helps his presidential friend W run the country. Even when he’s no longer in office, The Real Dick is perpetually in attack mode thereby earning his name.
Posted by David Martin at 12:41 PM 1 comment: 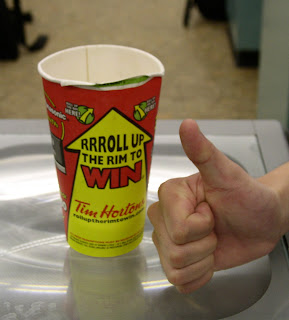 "Tim Hortons’ employees at Kandahar Airfield will be among the medal recipients from the Afghan war....."
- The Ottawa Citizen - March 28, 2010
They say war is hell and I’ve got the scars to prove it. Two tours of duty at the Kandahar Tim Hortons saw to that.
I didn’t sign on for two tours. All I wanted was one trip to Afghanistan and then get out. But once you’re there pouring coffees and passing crullers, the excitement gets in your blood and you can’t help but reup.
It wasn’t always like that. In fact, the first few months of my first rotation were deadly dull. That’s what happens when you’re not on the front lines.
I started out inside the wire, a lowly grunt grinding coffee beans and frying doughnuts. There’s no shame in that but it’s not the kind of action I signed on for.
So when I talked to my shift leader four months in and told him I couldn’t take much more, he sized me up and said: "Kid, I like the way you handle yourself but you’re still raw and untested. What makes you think you’re ready for the front line?"
Honestly, I couldn’t say but I just knew if I didn’t see some real action soon, I was going to go crazy. So I gave him the answer he wanted to hear: "Sir, yes sir, I’m ready. Send me in and you won’t regret it."
So the next day he sent me in and he almost did regret it. I thought I was ready for battle but all the training in the world can’t prepare you for the morning rush.
One minute I’m standing there loading Timbits in the wire trays and the next minute we’re overrun by soldiers yelling for double-doubles, dutchies and doughnuts. The orders were coming fast and furious and, for a moment, I thought I might cash out.
Luckily, I was teamed with Sarge, a grizzled veteran who knew the ropes and had seen it all. Just as I was about to take some flak from an incoming customer, Sarge stepped in front of me, filled the order, made change and sent the "coffee drinker" packing.
I owed Sarge for saving my bacon but that’s not all. I also owed him a debt of thanks for showing me the ropes and helping me make it through that first tour. If not for him, I doubt I would have even been around to sign up for a second one.
And what a tour it was. Everything they say about combat is true. You’re scared all the time but you’ve never felt so alive. And the bond you forge with your counter mates is even stronger than your family ties. You’d cover for any of those guys and, if you had to, even make change for a hundred.
But I guess my fondest memory of Afghanistan is the time I returned the favor and saved Sarge’s butt. It was late one night when things get quiet on the base and even the veterans tend to relax and let their guard down.
We were on closing duty together and, with minutes to go, Sarge had already emptied the carafes and tossed the leftovers. He had his back turned so he never saw the guy at the far table quietly rolling up his rim.
Without warning, the guy ran to the counter, tossed the open rim down and demanded a free coffee. Holding an empty carafe, Sarge turned around, completely defenseless.
I saw the look of fear in his eyes and, without thinking, I jumped in front of him and handed the guy my medium black, no sugar that I was saving for later back at the tents.
Sarge slumped in the corner, his face still ashen and said: "Thanks, kid; I owe you one."
"No you don’t, Sarge; don’t you remember?" I said. "Now we’re even."
Posted by David Martin at 2:27 PM 2 comments: