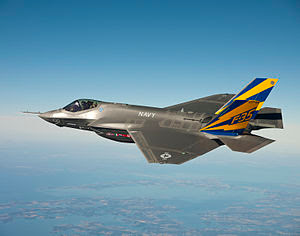 Ladies and gentlemen, welcome aboard Tory Airlines flight F-35. We’d like to thank you for choosing Tory Airlines. Although we know that most of you are having second thoughts about flying with us, we nevertheless appreciate that you have entrusted us with a majority position.
Today’s destination is as yet undetermined although we originally planned to land on time and under budget. Some of you may have heard that we’re heading for the point of no return. Others may have assumed that we’re on a path to financial oblivion. However, we’d like to assure you that we have no intention of veering off course again and we will no longer be flying by the seat of our pants.
Your aircraft has the latest in aviation technology thanks to the generous donations of you, the Canadian taxpayer. For the token sum of $2,000 each, you have helped build one of the fastest, most efficient fleets in the world. Despite the aircraft’s limited seating capacity, it will reach its destination in less time than you can say “what happened to our majority?”
Because of aisle restrictions, there will only be limited food and beverage service on this flight. Today’s menu consists of sour grapes, humble pie and roast crow.
For security reasons, on-board entertainment is restricted to a single movie: “The Hangover.” Furthermore, due to recent budget cuts, no CBC TV or radio broadcasts are available.
Your flight crew today is headed up by Captain Stephen Harper, a pilot with a wealth of flying experience although perhaps a bit shy in the oversight department. At last word, your co-pilot will be Peter MacKay although his assignment may be subject to last minute changes.
We would ask that you direct your attention to the front of the plane for a brief safety demonstration. This plane has no emergency exits although in the event of a mishap, the pilot will be able to eject safely and, in all likelihood, fall clear of any possible fallout and debris.
As for the remaining crew members, unfortunately there is no easy way out and they should resign themselves to their fate. Passengers, as always, will be responsible for any cost overruns and are basically on their own.
Prior to takeoff, rather than placing your seat in an upright position, we ask you instead to bend over. We would likewise ask you to have your credit card ready when exiting the plane as your ticket price may have increased significantly during the flight.
Once again, on behalf of the captain and the crew, we hope you have a pleasant flight wherever it might take you. As you may now have guessed, we really have no idea where we’re going. However, you can be assured that, as always, you’ll take it in the end.
Posted by David Martin at 9:10 PM No comments: 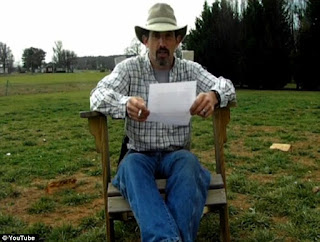 “A video of an angry American father pumping nine slugs from a handgun into his daughter's laptop has gone viral on YouTube and sparked an impassioned online debate over his parenting skills.
- The Ottawa Citizen - February 11, 2012
Tommy Jordan, of North Carolina, fired a round of bullets from his .45 handgun into his daughter Hannah’s laptop after she posted a complaint on Facebook about having to do chores around the house. Viewers from coast to coast have weighed in on the debate as to whether this constituted good parenting.
While the question of whether or not it is appropriate to shoot your child’s laptop is no doubt an important one, there are other more important issues that seem to have been lost in this debate. First, of course, is the fact that Mr. Jordan’s short shoot-em-up video shows him smoking a cigarette while dispatching his daughter’s computer.
I think we can all agree that, by smoking on camera, Mr. Jordan has not presented a desirable role model to either his daughter or the approximately two million YouTube viewers who watched his video. At the very least, he should have included a verbal aside or a video pop-up advising kids that smoking is bad for them.
A more important issue is the type of ammunition used in the laptop shooting. Mr. Jordan states that he used exploding hollow-point rounds which apparently cost him a dollar apiece. Was this the most effective and economical way to carry out the task at hand?
Clearly it would have been cheaper to have used lead round-nosed bullets and fully-jacketed bullets would have caused the smallest cavities. But to ensure maximum wounding effect, albeit at a greater cost, exploding hollow-point rounds were definitely a good choice. For future computer shootings, Mr. Jordan might want to compromise between cost and effectiveness and go with semi-wadcutter bullets.
A subsidiary issue worthy of debate is why Mr. Jordan chose to use nine bullets. From the video, it appears that four or five slugs judiciously placed would have achieved the desired result. On the other hand, he was not simply trying to disable the computer; he was also trying to make a point about his daughter’s bad behavior. Thus, a few extra shots were probably called for with an absolute upper limit, say, of twelve to avoid any possibility of message overkill.
What is particularly surprising to me is that few, if any, YouTube viewers raised the important question of what brand of laptop this was and how did it perform after the shooting? A related question is whether Mr. Jordan had purchased any extended warranty coverage and, if so, did he opt for firearm damage protection?
There remains, of course, one far more important question to discuss: Was Mr. Jordan restricted by the handgun laws in his home state of North Carolina? Did he have no choice but to use a .45 handgun? Was the option of a semi-automatic Glock not available to him? If not, why not? After all, this is America and the right to bear arms should be as little restricted as possible, particularly when it comes to computer killings.
Whether you’re a responsible parent trying to make a point to your rebellious teenage daughter or you’re a frustrated porn viewer whose desktop has frozen for the hundredth time, you should be guaranteed as wide an array of firearm options to dispatch the offending piece of computer hardware. After all, in America, when your computer screws up or dies, you have every right to finish it off in any manner you choose.
Posted by David Martin at 5:40 PM No comments: