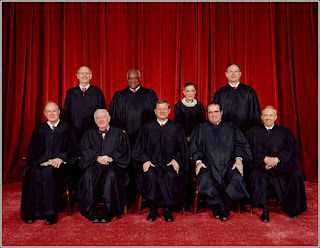 To the casual observer, it might appear that every recent decision of the Supreme Court has been decided by a 5-4 vote.  From Citizens United to the Affordable Care Act, the Court has issued a number of close high-profile split decisions.  But that’s not always the case as evidenced by these recent unreported decisions:
Roberts v. Department of the Treasury
In an unrecorded 9-0 vote, the Supreme Court unanimously upheld the Chief Justice’s petition to increase the base salaries of the members of the Court.  No written reasons were provided although the official Court file apparently contains a yellow sticky note signed by Justice Kennedy (age 76) urging his colleagues to unilaterally expand their ruling to also include a hefty pension increase.  A second note signed by Justice Sotamayor reportedly reads: “While we’re at it, a swimming pool in the basement would be nice.  Just saying.  Cheers, Sonia.”
Ginsburg v. Timex
In an unsigned order, the Court denied Justice Ruth Bader Ginsburg her request for funds to purchase an electric clock-radio reportedly by an 8-0 vote.  As the oldest member of the current Court, Justice Ginsburg was apparently having trouble getting up in time to make morning sittings.  Reasons are typically not provided for such orders but rumor has it that Justice Antonin Scalia argued aggressively against his colleague’s request on a strict constructionist basis.  Given that the founding fathers did not have radios or electric timepieces, Scalia felt that compensating such a purchase was clearly unconstitutional.
Thomas v. Timex
In another unsigned order, Justice Clarence Thomas was granted his request for compensation for his purchase of an alarm clock, reportedly by a 7-1 vote.  Despite the similarities to Justice Ginsburg’s case, most of the justices were able to easily distinguish the two fact situations.  “This was clearly a work-related expense,” said Chief Justice Roberts.  “Clarence didn’t need the clock to get to work but instead required it to wake him from frequent naps on the bench.”  Not surprisingly, Madame Justice Ginsburg dissented vigorously but Justice Scalia won the day by pointing out that Clarence Thomas’s clock was wind-up and not electric thereby clearly falling within the original intent of the framers of the Constitution.
In re summer recess
In an unreported ruling, the nine justices of the Supreme Court unanimously decided last week that they would shut down the office immediately and take the rest of the summer off.  In a per curiam decision, Chief Justice John Roberts, speaking for the Court, stated that “it is unanimously agreed that it’s just too damn hot in Washington during the summer and that we’d all like to get the hell out of here at least for July and August.”  In fact, all nine justices further agreed to recess right through September as well.  “We’re thinking the first Monday in October might be a nice time to get back to work,” said Roberts.

Posted by David Martin at 1:54 PM No comments: