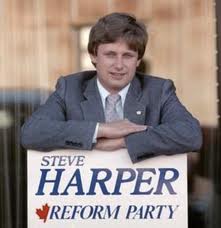 How I Spent My Summer Vacation -  by Stevie Harper

I live in a big house on Sussex Drive in Ottawa but my real home is in Calgary.  I wanted to go home for the summer but there was too much to do in Ottawa.  I have a bunch of cabinet ministers who could help me out but I can’t really trust them to make decisions on their own, especially when it comes to buying hotel orange juice and taking helicopter rides.  So I had to stay here and work every day.
Well, not every day.  In June, I got to take a short trip to Mexico so I could tell some European leaders how they can clean up their financial mess.  I was just trying to be helpful but they got all annoyed and told me to back off and clean up my own mess.  Something about our debt to GDP ratio being no better than theirs.  Go figure.
I also got to go home for a few days in July to enjoy the Calgary Stampede.  Calgary really is great, you know, and I couldn’t help pointing out that it’s the greatest city in the greatest country in the world.  Some folks said I forgot about Toronto so I apologize for that.  Just kidding.
Back in Ottawa, I had to help create some TV ads for the bicentennial celebration of the War of 1812.  Did you know that we won that war?  I don’t think a lot of Canadians knew that so it’s a good thing that we spent a lot of money letting them know.  We just have to be careful not to annoy the Americans in case they decide to start the War of 2012.  I’m not sure we’d do so well in that one.
I also had some unfinished work to complete from last year.  First off, I had to close the Canadian Wheat Board.  Believe it or not, some folks still thought it was a good idea to benefit from large-scale grain sales and to share the risk of crop failure.  No need to worry about that anymore.
I also had to clean up a few odds and ends after getting rid of the long-gun registry. Some people wanted to keep the records so they could start their own registry.  How silly is that?  If they want a gun registry, they’ll have to start from scratch just like those crazy Liberals did.
Speaking of those crazy Liberals, it looks like they won’t be around much longer.  Some folks say that, just to make sure, I’m not picking on that new kid Tommy Mulcair.  Boy, some people are really cynical.  I love the Liberals.  After all, if we didn’t have the Liberals around, how could we still split the left-of-center voter?
There was also that ongoing project to cut back on the federal public service.  It’s not easy to cut 20,000 jobs, you know.  Especially when you do it really, really slowly and you make people compete against one another for positions.  Some folks said that, like my buddy Mitt Romney, I seemed to enjoy firing people.  But that’s not true. Well not entirely true.
Of course, it wasn’t all work this summer.  I got to do some reading, especially some books by my favorite authors Ayn Rand, Sun Tzu and Machiavelli and a few letters from that nice Conrad Black fellow.  Did you know he spent time in a U. S. prison and had to give up his Canadian citizenship?  Doesn’t seem fair, does it?
It looks like I’m going to have to stay here in Ottawa right through Labor Day.  There’s so much to do and so little time.  I’ve gotta sort out the accounting for some fighter jet purchases.  I’ve gotta help my friends in Alberta get their oilsands oil to the Pacific coast and onto China.  And then there’s my secret agenda.  Just kidding, of course, since it’s really no secret anymore.
Finally, there are a few provincial premiers who I’m going to help get new jobs soon.  Anything to help out the economy, I always say.  That’s just the kind of guy I am.


Posted by David Martin at 1:16 PM No comments: