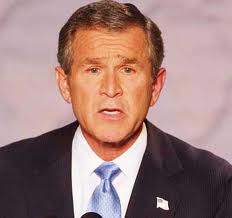 In a surprise move, George W. Bush has endorsed Barack Obama in this Tuesday’s election.  Although usually reluctant to get involved in current politics, the former president has decided to take the plunge and support the Democratic candidate.
“I know you all must think this is a crazy choice,” said Mr. Bush.  “But the more I looked at Barry’s record, the more I realized that we have a lot in common.  For example, we’ve both created trillion dollar deficits and we’ve both had to deal with ongoing wars in Iraq and Afghanistan.”
The Obama campaign has been caught off guard and appears unsure how to deal with this latest development.  Campaign spokesperson David Axelrod was less than enthusiastic about Mr. Bush’s endorsement.
“We want to thank Mr. Bush for coming out in support of President Obama,” said Axelrod. “But we already have the support of former presidents Jimmy Carter and Bill Clinton so I think an endorsement from a third ex-president would be overkill.”
Some have speculated that Mr. Bush’s decision was precipitated by Mitt Romney throwing him under the campaign bus in the second presidential debate.
“I have to be honest here and say that it did bother me when the Mittster trashed my record,” said the former president. “In fact, Barry had more nice things to say about me than he did.  But no, this endorsement is from the heart - wink, wink.”
The Romney campaign has publicly expressed its regret that former President Bush did not see fit to publicly support Governor Romney.  Privately, however, they couldn’t be happier.
“President Bush is free to support whoever he wants,” said a giddy Romney spokesperson Andrea Saul. “We are, of course, disappointed but perhaps it isn’t surprising that a big spending war hawk would go with one of his own.”
Faced with accusations that he purposely threw his support to Obama in order to undermine the incumbent’s chances, Mr. Bush was indignant.
“I assume that any presidential candidate would be thrilled to receive my okay,” said Bush.  “And I can’t imagine why anyone would turn it down - nudge, nudge.”
If the polling numbers start breaking Romney’s way, look for more surprise endorsements for President Obama including ones from Sarah Palin and Donald Trump.  Rumor has it that even Dick Cheney may go public with his support for Vice President Joe Biden.